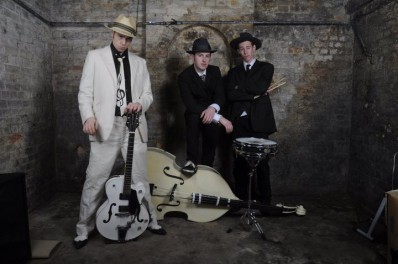 The Zipheads hail from St Albans, UK. Initially formed as a punk band around 2005, taking influence from The Clash, Stiff Little Fingers, Descendents and the like, the band members eventually became more and more enamoured with 50’s Rock’n’Roll and Rockabilly, and The Zipheads was put on hiatus to form The Runaway Boys, a rock’n’roll revue band, playing every pub, town hall and social club in the south east.

The Runaway Boys saw the introduction of double bass as opposed to bass guitar, and it was in this band that the young musicians cut their teeth, bashing out 50s classics with a punk sensibility and more than a nod to the pub rock scene of the 70s.

2008 saw the release of an EP containing the first ever self-penned songs by the band and a shift to focus on original material rather than covers. The band lay dormant for a while and around 2010 The Runaway Boys moniker was dropped and The Zipheads mantle was restored.

The band hit the road and played numerous gigs across the UK and Europe, playing on the bill alongside punk bands such as Peter and The Test Tube Babies and Discharge, as well as opening for 2-Tone heroes The Selecter, The Beat and Neville Staple.

The Zipheads also found a home in the Psychobilly scene, where their punk-infused rockabilly made a lasting impression and has seen them play with legendary psychobilly bands The Meteors, Guana Batz, Demented Are Go, King Kurt, Mad Sin and many more as well as appearances at Psychobilly festivals across Spain, France, Finland, Sweden and the Netherlands.

In 2013 they released their debut album Prehistoric Beat to an unsuspecting public. The 12 track mix of punk, rockabilly, reggae, ska and swing was well received, featuring the song ‘Revenge’ for which the band shot a music video, and a rockin’ cover of the Toots and The Maytals classic reggae hit ’54-46 Was My Number’, a fan favourite and still a staple of the bands live set. 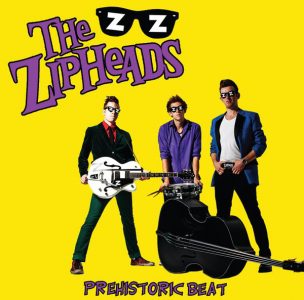 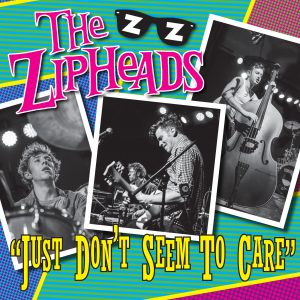 The 500 copies of the vinyl that were printed have sold out and are now a rare collectors item.

November 2016 saw the release of their much-anticipated second album- Z2:Rampage! on Bomber Music, to rave reviews and a spot in Vive Le Rock’s Top 50 Albums of the year. Accompanying the release was a celebrated music video for the song ‘Last Man On Earth’ featuring the band in a post-apocalyptic setting and paying homage to the films Mad Max, Planet Of The Apes and others, as well as the Fallout video game series.

Preceding the albums release the band embarked on a week-long tour of Florida- their first appearance in the USA, they would return to the west coast in 2018 for shows in California and Las Vegas.

Years of relentless gigging followed, with the band appearing at Glastonbury and Boomtown festivals for the first time and longer tours covering more of the European mainland than ever before, with the bands first shows in Poland, Italy, Hungary and the Czech Republic, reaching as far as Sardinia and even a spot on Estonian national television (its on YouTube). 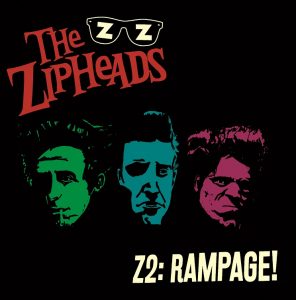 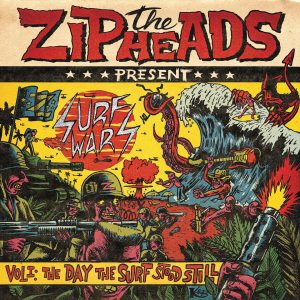 Despite the pandemic hitting in 2020, in April of that year the band were able to release a charity single in association with the Joe Strummer Foundation, cementing the bands long-standing love of The Clash with their own version of the song ‘Bankrobber’ with the proceeds going toward other struggling musicians.

During the lockdown, with no live shows, the band started work on a project they had conceived of many years ago- a record of music inspired by their love of instrumental surf-rock. Surf Wars Vol1: The Day The Surf Stood Still was released in February 2022 as a 4-track EP to glowing reviews from both the surf-rock community and mainstream rock publications. The launch show in London and a handful of other dates saw the Zipheads perform these songs and others as a 4-piece for the first time with Zipheads collaborator Tom Malins on second guitar and the live debut of bassist Dick Dynamite on both double bass and bass guitar.

Now, back to playing as a 3-piece, the band is gearing up for the release of new single ‘Telekinesis’ (out 1st Dec) and hitting the road once again with their first UK tour in 4 years- get to a show near you!!